Remembering the 1980s: Raising the Standard for Safety and Technical Excellence 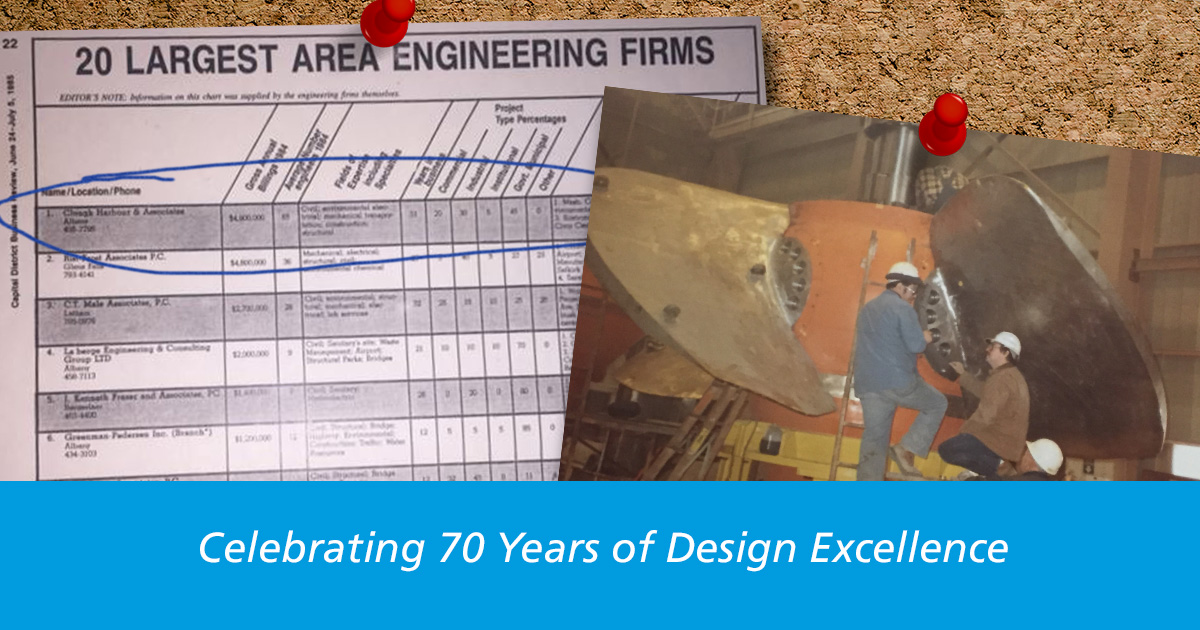 An unprecedented pop culture explosion and the arrival of personal computers forever changed the home and workplace in the 1980s. Apple IIs, Microsoft Word, brick phones, fax machines, and power suits were the tools of the trade for the era’s fast-paced business environment. Emphatic fashion—big hair, spandex, acid wash jeans, and neon-colored apparel—externalized the positive outlook many felt.

Economic optimism roused a new wave of diversification for Clough Associates, acting as the catalyst for a surge of expansion in the 1980s. In the intervening years, the company’s industry footprint had grown far beyond its strong transportation beginnings. Now it included civil and environmental, electrical and mechanical, structural, geotechnical, and survey teams. Multi-discipline services were a key differentiator as the company took on larger, more complex projects. From its Albany, New York headquarters, the company was beginning to look much like it does today—notably, through a distinct name change in the year music television killed the radio star. In 1981, Clough Associates became Clough, Harbour & Associates, or CHA for short.

Clough, Harbour & Associates is one of our most well-known names. Rightfully so, as these three words are, in fact, behind the abbreviation CHA. The name’s origins are tied to two of the company’s most prominent leaders following the retirement of founder John Clarkeson. In the mid-1960s, the company’s name was changed to Clarkeson & Clough Associates with the addition of Ronald Clough as partner. Clough, a like-minded pioneer in innovative highway and bridge infrastructure design, became full owner of the company in the early 1970s, changing the name to simply Clough Associates. This name would stick for a decade until, in 1981, William A. Harbour became Managing Partner and CEO. Harbour had begun his career with the company in 1960 while earning his bachelor’s in civil engineering. He applied his firsthand knowledge of virtually all the work performed over the past two decades to invigorate the company’s focus on quality and technical excellence. The company’s name was changed to match its new leadership. Clough, Harbour & Associates remained the company’s main name until years after Bill Harbour’s retirement 20 years later. In 2008, the name was shortened to use only the initials: CHA.

Meanwhile, back in the ‘80s, Clough, Harbour & Associates was thriving. Water projects like the Mountain Brook Reservoir in New Hampshire and the Mill “C” Hydroelectric and Mechanicville Hydro Plant in Upstate New York began to expand CHA’s expertise in the water market—and build on relationships with key government clients. By 1985, while Marty McFly traveled back in time and New Coke landed on store shelves, then swiftly left them, CHA had become #1 on the Capital District Business Review’s list of “20 Largest Area Engineering Firms.”

The 1980s marked the beginnings of CHA’s distinctive “Technical Excellence” focus. Archived documents show production coordination and quality control touching all groups in 1984. Detailed project checklists began to accompany meeting notes, and correspondence with clients discussed concerns over safety, staffing levels, and the need for registered professional engineer consultation and sign-off. Unlike the $2.64 it took to purchase a pound of bacon and one dozen eggs, you could not put a price tag on the value of safety. Another archival clipping details a preventable steam pipe accident at a rival company’s project site where eight workers were injured. Noted across the bottom is “Don’t Let It Happen Here,” using the example both as a safety warning and lesson learned—a tradition that CHA’s chief engineers continue each month with the publication of the Technical Excellence Lessons Learned series.